Full Name
Jonathan Alger
Title
President
Institution
James Madison University
Speaker Bio
Jonathan Alger took office in 2012 as the sixth 234024 2016 Jon Alger Portraits-1019president of James Madison University. Under his leadership, JMU has developed a new vision statement to be “the national model of the engaged university: engaged with ideas and the world,” along with a new strategic plan focused on engaged learning, community engagement, and civic engagement.

President Alger’s previous higher education service has included positions at Rutgers University (as Senior Vice President and General Counsel), the University of Michigan, the American Association of University Professors, and the U.S. Department of Education. He helped to coordinate the University of Michigan’s efforts in two landmark Supreme Court cases regarding diversity in admissions, and has provided national leadership for many initiatives related to access and inclusion.

President Alger was previously the chair of the board of the National Association of College and University Attorneys, from which he has received the Life Member and Distinguished Service awards. He has also served as a member of the NCAA Division I Board of Directors and the Advisory Council for the National Heart, Lung, and Blood Institute at the National Institutes of Health.

Sharing his institution’s strong commitment to assessment and accountability, President Alger has served on numerous accreditation site visit teams for other universities through the Southern Association of Colleges and Schools Commission on Colleges (SACSCOC), as well as for law schools through the American Bar Association (ABA). He served on the ABA’s national Accreditation Committee from 2009-2012.

A nationally recognized scholar on higher education policy and law, President Alger has given presentations at hundreds of conferences and campuses across the country and abroad, and has also published extensively in legal and higher education journals and periodicals. He co-teaches a leadership seminar in the JMU Honors College and has previously taught courses in law, higher education and public policy at the undergraduate and graduate levels.

President Alger graduated with High Honors and Phi Beta Kappa from Swarthmore College with a political science major, history minor and public policy concentration, and with Honors from Harvard Law School.
Speaking At
Standing up for Democracy: A Conversation with Harry Dunn
Conference Closing & Final Reflections 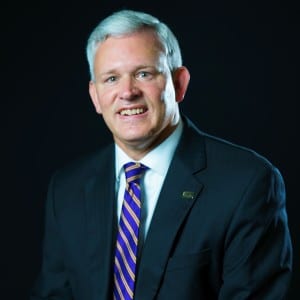